In the Past few days I have been really busy on getting some things done to the radio. First off, I made some changes to the wiring in the radio by first making one of the blades wider on the power plug to turn it into a polarized plug. Then I changed the wiring in the radio itself to route the hot side.of the power through the on/off switch. This will prevent the chassis from ever becoming a “Hot” chassis and will help ensure that anyone that is around the radio while it is plugged in will not live a shorter life due to electrocution! 😉 It amazes me that things were done that way back then simply to keep any extra noise from the hot wire from bleeding into the radio while it is playing! I guess they figured if you touched the wrong thing and killed yourself it was your fault! 😉

After that, I began work on the MP3 player! I soldered some headers to the MP3 shield, plugged it into the Arduino UNO micro-controller, loaded up the Arduino software and installed the software libraries to make it do its thing! After a bit of troubleshooting, it was working as expected. So it was time to add the potentiometer to the circuit and start programming.

Once I had the potentiometer working and sending a signal to one of the Analog pins on the Arduino, I created some functions to play specific stations based on the position of the potentiometer. Music will be sent based on a random number generator so it will always be played in a different order. Then I added in some code to play some period specific commercials that I ran across on the internet and downloaded. A commercial will now be played in between songs about once every 10 minutes or so. 😉 So with all of that working as it should, all I have left to do with that part is get all the music converted to the proper format and naming convention, then load it up to the SD card.

Now, since it is a bit difficult to just run out an buy small dial cord pulleys in any size you want, I knew I would be machining my own custom pulley for this application. And thanks my son’s experimenting with his own backyard aluminum foundry, I had a chunk of aluminum that would work perfectly for this!

So I started to work on the aluminum on the mill to get a milled flat surface on both sides of the aluminum plate. One I had it milled flat and down in thickness a bit, I marked circle and drilled some holes around the perimeter of the circle to cut a disc out of it.

I then drilled a hole in the center of the disc, mounted it to bolt, then chucked it up in the mini lathe to machine it into a perfect circular disc.

The next step was to use the lathe to machine the disc into a pulley of the proper diameter and add a grove that the dial cord can ride in! This took a little time but it turned out great! Then I used two aluminum strips to make a clamp mount to mount the potentiometer with the new pulley and mounted it all to the radio. After that it was just a matter of cutting a longer piece of dial cord and routing it around the new pulley. Works like a charm!

Here are some photos taken of some of the things mentioned above:

Here is a shot of the power plug after soldering a piece of component lead to the blade to widen it and turn it into a polarized plug. 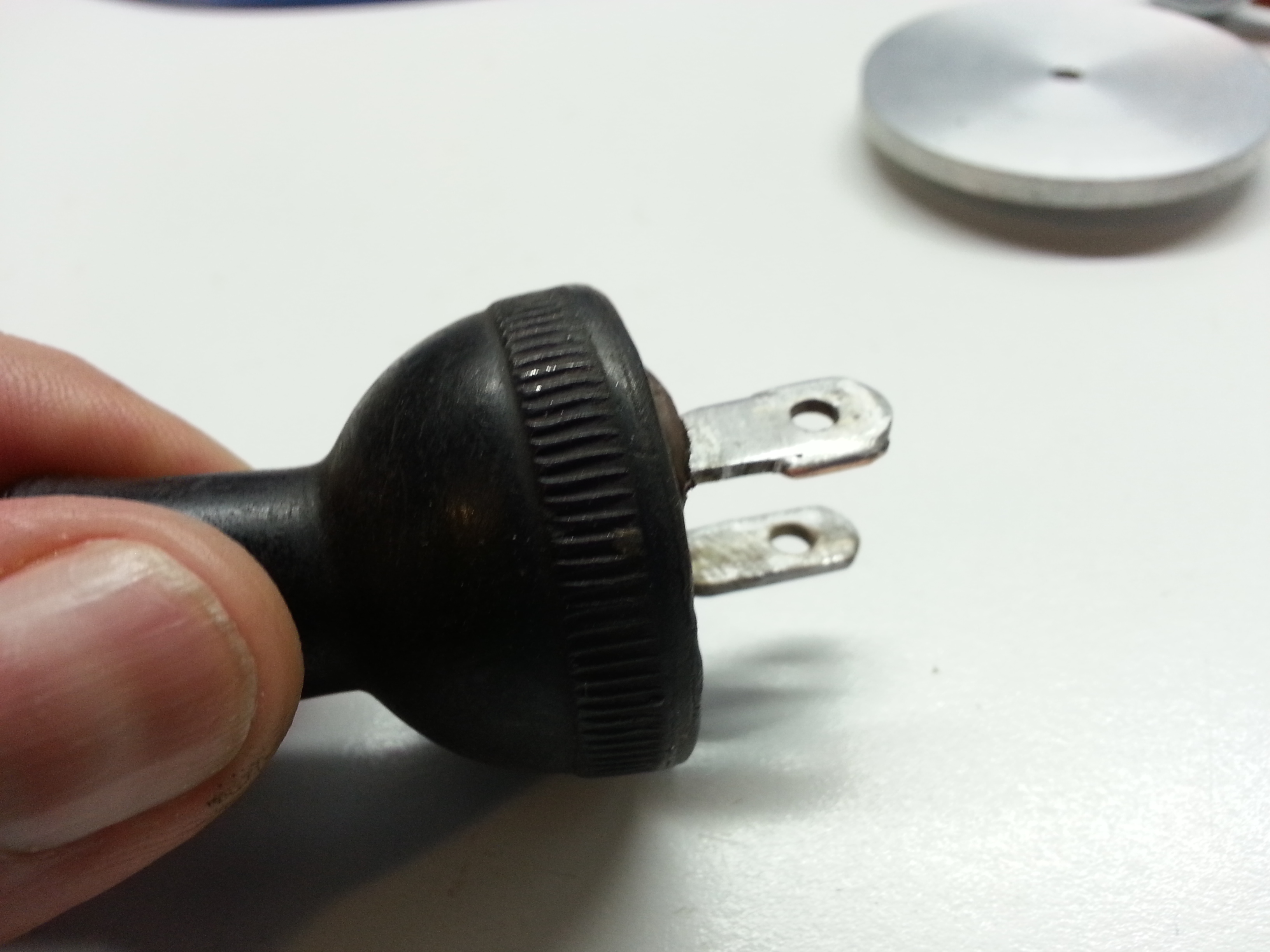 Here is a shot of the chunk of aluminum after milling it down to a flat surface:

After machining the blank down on the lathe, here is the disk that will ultimately become the pulley:

And here is the final pulley: 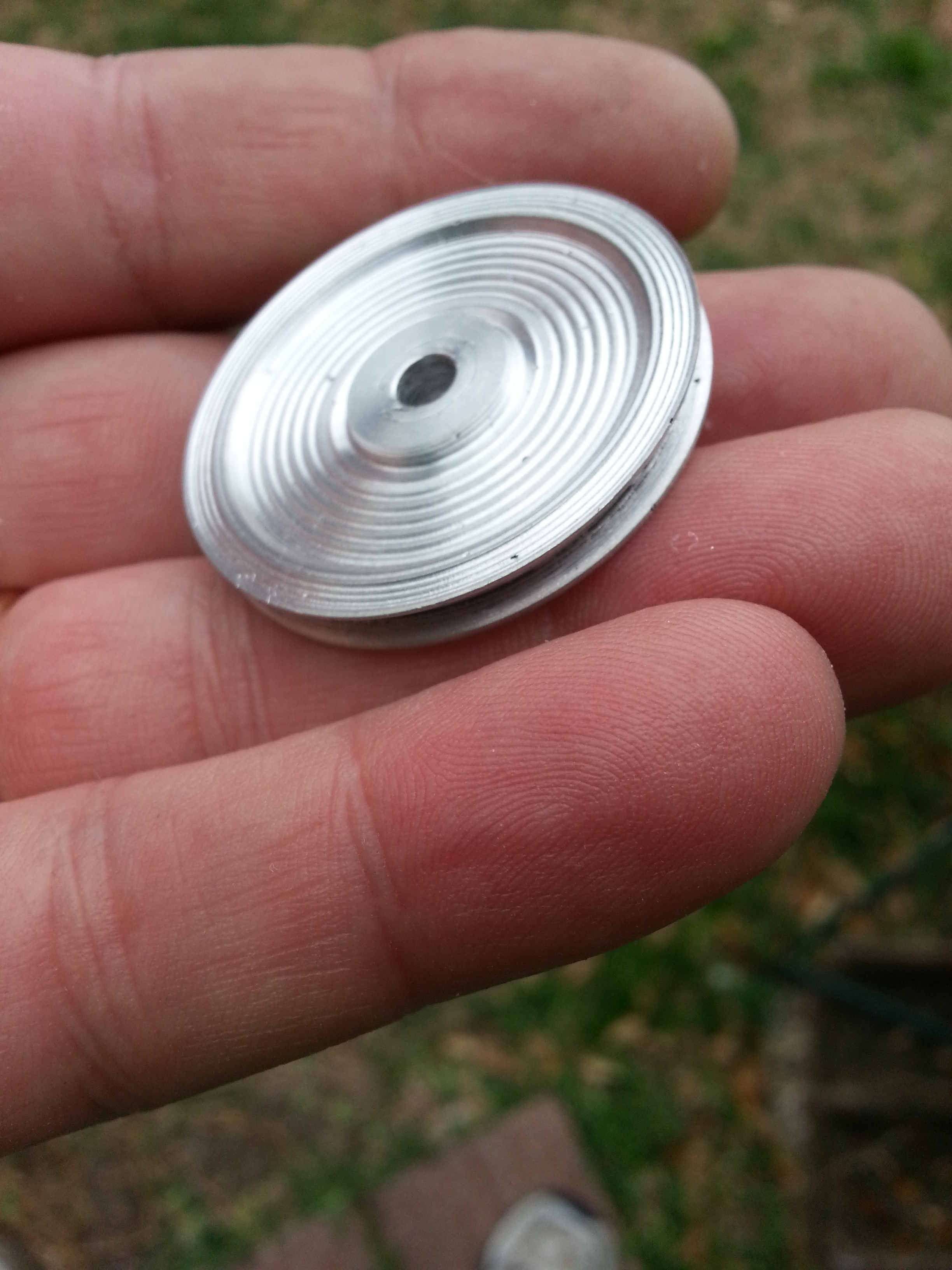 Here is a video clip of the mounted Pulley and Potentiometer that will give dial positioning to the Arduino board. Note that the mount for this is totally non-destructive to the original radio.

Here is a video clip taken while machining the aluminum blank on the lathe to make the pulley.